How The Couple Built a Submarine House for $20,000 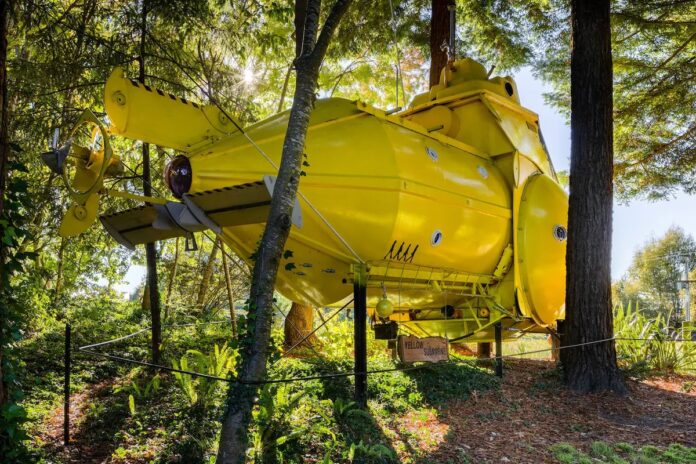 Dreamer Keith Lovelock, a former radio technician, planned to do something fun for himself and his wife.

His wife also loved the idea and was looking for something suitable for it. While browsing Trademe (an online auction site) one day, he found a fiberglass silo for $1.

After purchasing this strange item, they had to pay $320 to have it delivered to their farm.

Since the structure of the silo resembles a submarine, Keith Lovelock had the idea that he could turn it into a submarine. So when you look at the books and find out that it will take many years to build a submarine, “Oh my God, what have I done?” he thought. However, he started working with his childhood dream and realized his dream in 1 year.

After washing the silo, Keith saw that it was gray and decided to paint it yellow, finding it cold. The reason he chose the color yellow was the submarine in the lyrics of the Beatles’ hit song “Yellow Submarine”. For this reason, the green sea mentioned in the lyrics of the song was also the sequoia trees in his property.

Keith started to build his tiny house, starting with the façade of the silo he placed among the green sequoia trees.

In the construction, she used many materials that he had before.

For example, he created a submarine deck by turning a spare jacuzzi into a sweat. He used an extractor fan for the submarine propeller. He added pieces from old solar panels, television satellite dishes, and airplane floors to create an authentic look.

This yellow tiny house was planned as two floors and recycled materials were used in the decoration.

At the entrance, a kitchen counter made of an old dresser and a Chesterfield leather sofa greet you. In the radar room next to it, there is a table converted from an oak headboard.

When you go to the back of the tiny house, there is a bedroom with 2 bunk beds where four people can sleep comfortably. Toilet, sink and hot water shower are also placed in this section.

Upstairs there is only one captain’s seat.

Keith estimates they spent about $20,000 to build the submarine house.

$4350 turns an Abandoned House into a Stunning Tiny Home!

$4350 turns an Abandoned House into a Stunning Tiny Home!

Mr Talha on How This Couple Built Their Own Vertical Tiny House
Yael Simckes on How This Family Built a $14,000 Tiny House
Mario Lopez on Quiet Space House A Frame
on Robert & Julia’s Mega Tiny Vulcan
Tonja Worsham on Remodel of an Old House Converted into a Loft Style Tiny Apartment

They Built Their Dream $35k Tiny House on Wheels

Living in a Tiny is a blog focused on showing the world's best and unique tiny house ideas. We are here to inspire you!