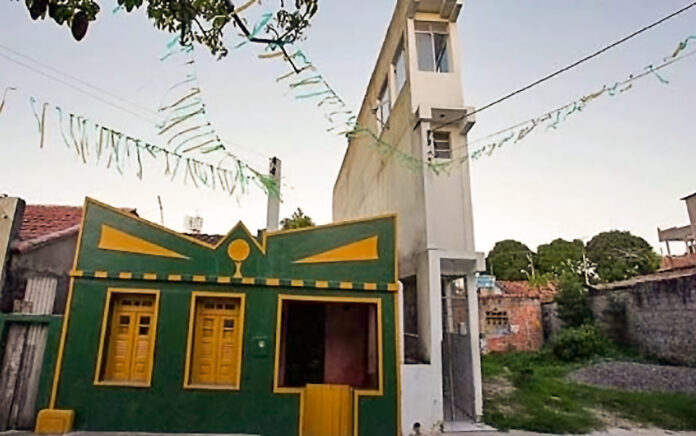 Choosing a simpler, quieter life is a feeling we all get from time to time. We dream of moving to a smaller house and living in a quiet neighborhood.
If you want to know one of the most extreme examples of such a dream, we recommend you to read our article.

The Narrowest House in the World

Designed by architect Helenita Queiroz Mezar Minho, the world’s tiniest, the narrowest house has a width of 1m and a depth and height of 10m.

The building consists of load-bearing walls supporting a unidirectional network of beams, with the two median walls having no problem covering a very short distance.

The design is based on the maximum utilization of minimum space.

The land for this house belongs to the architect Helenita Queiroz Grave Minho, who, in the light of the constraints of the land, aimed for maximum utility and comfort of use in a minimum space, resulting in such an improvised house. The municipality did not allow the construction of such a house at first, and after long and bureaucratic processes, Architect Helenita Queiroz Grave Minho realized this improvised tiny house.

The tiny house has a great contribution to tourism

The house is now one of the most popular tourist attractions in the city where they live. Thanks to its popularity, he also obtained the necessary work license to realize his project.
Although the building has various difficulties due to its size, surprisingly, it has 3 bedrooms, 2 rooms, a kitchen, laundry, and a toilet.

The budget is also quite modest

Considering that this residence is one of the most popular landmarks in the city today, it’s amazing how modest it is, with such a low budget and minimal resources.
The materials used, the construction technique, and the creation of tiny, narrow but useful spaces are truly remarkable.

One of the most original designs among Tiny House examples, the house is located in Madre de Deus, a town of 12,000 inhabitants about 50 kilometers from El Salvador in Brazil.
This building is a great example of a design that focuses on economy and utility over aesthetics and design.

Love what you see? Share your home makeover with us and we’ll feature it on our blog.

Email us at info@livinginatiny.com and tell us about your project.

Transformation of a Shabby-Looking Space into a Tiny Home

How a Victorian Warehouse Became a Tiny House

How a Victorian Warehouse Became a Tiny House

They Built Their Dream $35k Tiny House on Wheels

Living in a Tiny is a blog focused on showing the world's best and unique tiny house ideas. We are here to inspire you!